You have a water leak in your basement. You call a plumber in the middle of the night. He comes immediately and fixes the issue. This early action saved you countless hours of cleanup, plus the expense of lost valuables.

The plumber arrives. Your radiators aren’t putting out much heat. He heads to the basement, expertly replaces a circulator pump, bleeds the air out of the system, and your house definitely gets warmer. Your chills, while still present, are noticeably less troubling than before. Job done. Pretty much.

What point are we laboring to make? Our financial world is suffering from many ailments, as it always does. The most recent (really) big problem was the 2008 financial crisis. Central banks came in and solved what was then a liquidity problem. Since then, the go-to response to new problems is for central banks to do what worked last time: increase liquidity and lower rates. Brexit? Lower rates. Trade wars? Lower rates. Potential pandemic? Lower rates.

“I suppose it is tempting, if the only tool you have is a hammer, to treat everything as if it were a nail,” said Abraham Maslow aptly, a concept you perhaps know as the Law of the Instrument.

In the chills-at-night scenario, calling the plumber resulted in you still being sick but having now spent money on something that wasn’t broken or that, at any rate, wasn’t the fundamental problem. As it is with the plumbers, so it is with the central banks. They are treating with liquidity a problem that is structural. The unintended consequences of their tangential actions has been to create unstable situations in the financial markets, as well as a false sense of security that central banks have now figured out the lever to smooth economic ills.

This isn’t the only time we have experienced these hubristic moments. From the LA Times in 1928:

And from the Wall Street Journal in September 1929:

For good thinkers, economists still have an uncanny ability to fool themselves, pushing one solution and applying it to any and all problems. Unfortunately, they fail to realize that their meddling has traditionally led to excessive leverage-building in the system. It can also amplify any economic pullbacks. 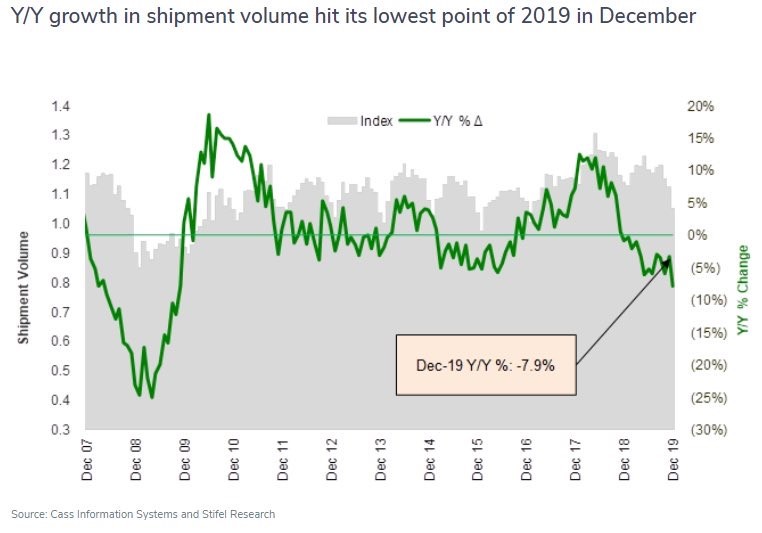 No one knows the true potential impact on the global economy of the coronavirus. What we do know is that the world economy was weakening even before the epidemic. That softening, combined with the already disruptive force of the virus, looms threateningly. Maybe central banks can put a wrench on the pipe one more time, but each new “plumbing” attempt exposes their ineffectiveness. And their recognition of that fact is increasing, as seen by the comments of the new head of the European Central Bank, Christine LeGarade, who told the European Parliament that fundamental trends and “the legacy of the financial crisis have driven interest rates down. This low interest rate and low inflation environment has significantly reduced the scope for the ECB and other central banks worldwide to ease monetary policy in the face of the economic downturn.”

We wrote in our fourth-quarter commentary that earnings declined as the market ramped up in late 2019. Market participants were buying before the rebound. We aren’t sure the rebound is happening, and the coronavirus is adding to our concerns. 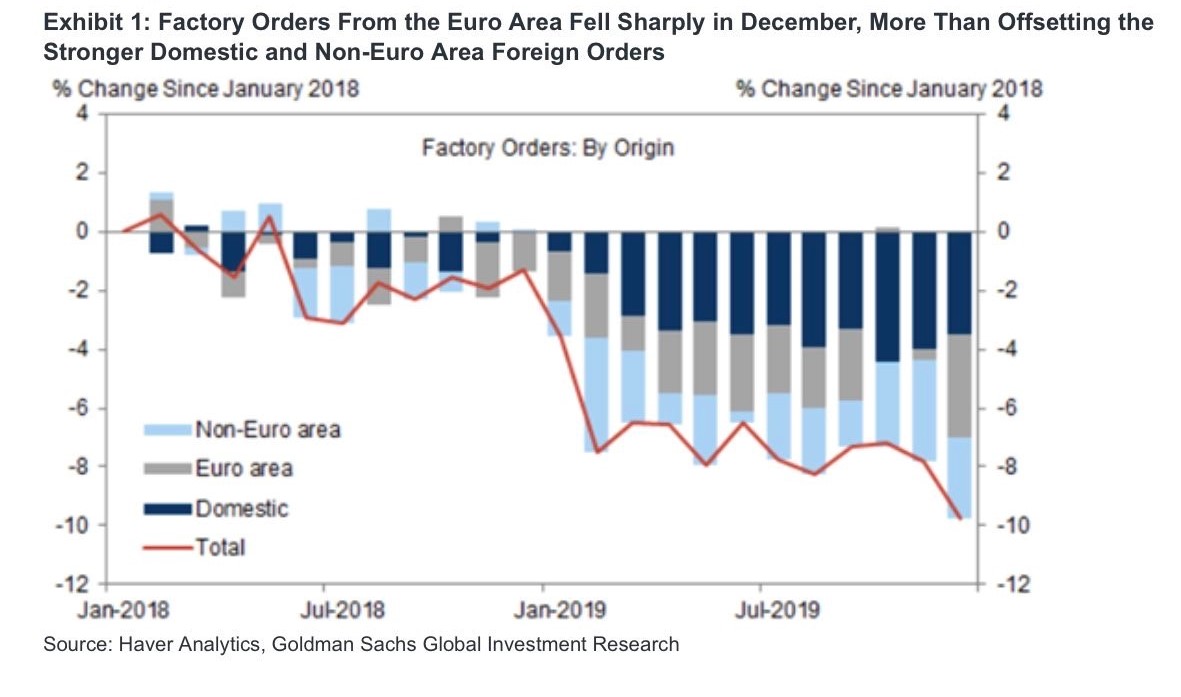 Let’s start with where we were prior to the outbreak: World economic activity was unhealthy, and markets were not showing meaningful signs of recovery. Global shipping volumes were declining. Europe was in a manufacturing recession. 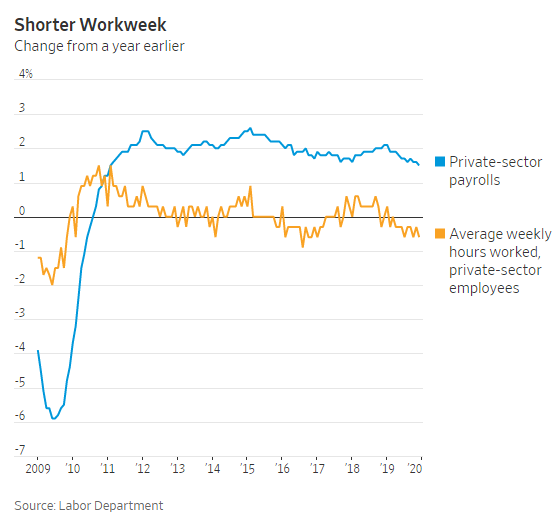 And although the U.S. headline jobs numbers looked good, the underlying hours worked were sluggish, which suggests the employment landscape was shifting under the surface.

The sign of capacity excess, shown by lower hours worked, was supported by data showing U.S. companies pulling back on the number of job openings. The ensuing reduction in job openings happened swiftly. Remember, this was before the feared pandemic began to impact growth plans for 2020. 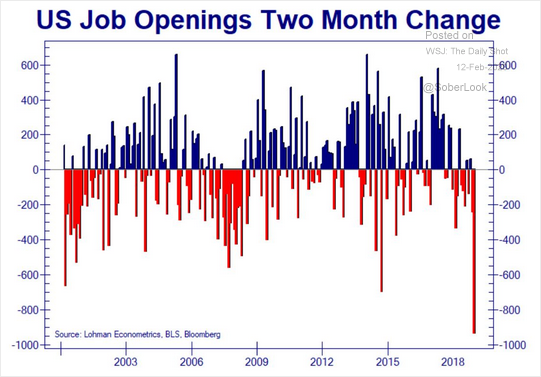 Let’s not forget China’s economic weakness in 2019, as the trade war and the debt overhang wreaked havoc on the economy. Due to China’s effort to grow its economy by doubling its debt levels over the past 10 years, the country was already weak, with rising levels of non-performing loans and bad debts in an already over-leveraged economy.

And this was all before the virus.

Since early January, post-coronavirus outbreak, economic activity in China has ground to a halt. The Chinese New Year celebration usually slows the economy temporarily, but with Chinese authorities trying to control the spread of the virus by essentially locking down cities that hold, in total, roughly 400 million people, the typical rebound is not happening. Commuting metrics, for example, are showing a near halt in transportation. And coal consumption has seen no pickup. 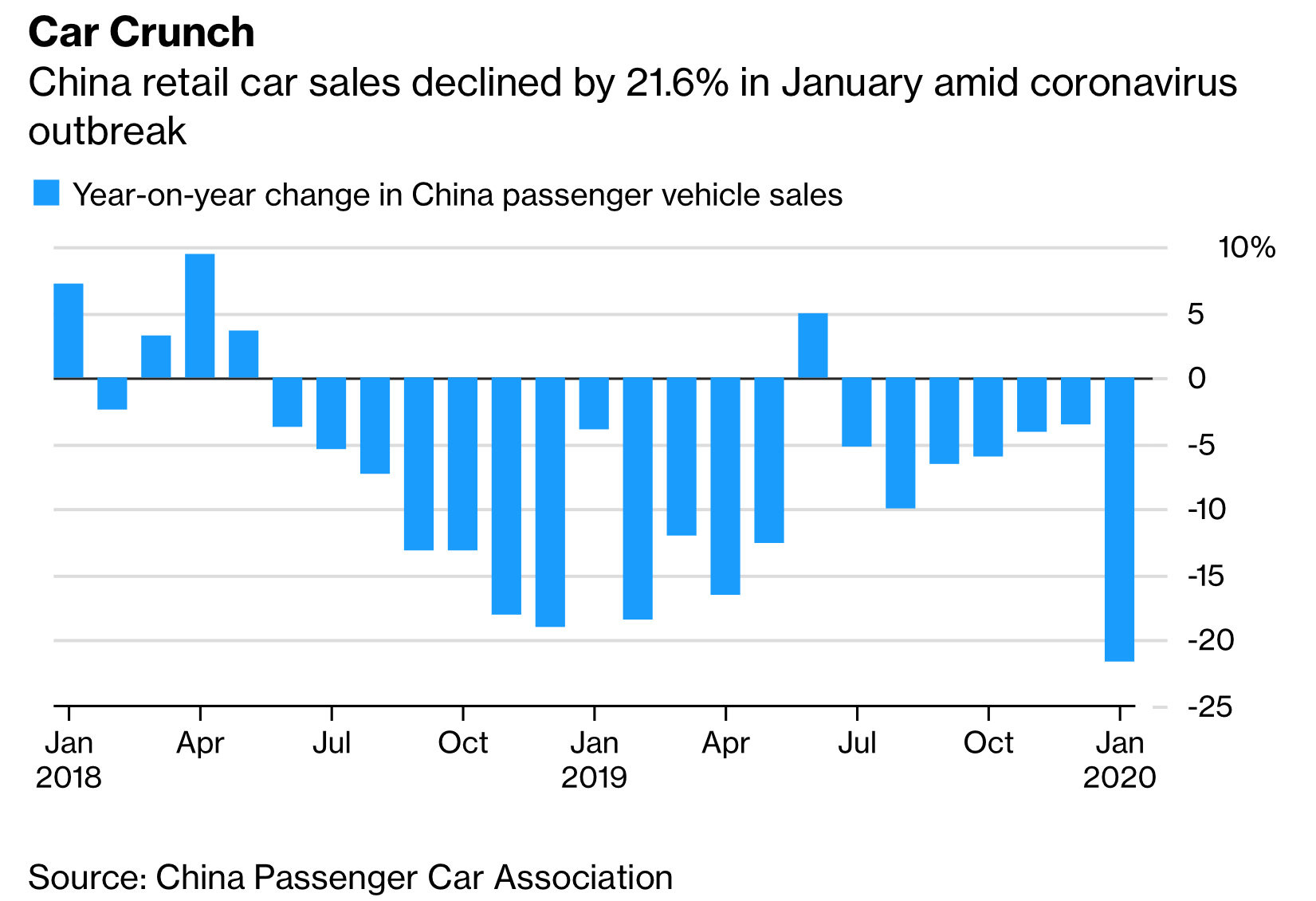 Anecdotal stories of a drop to near zero in restaurant traffic and other retail activity is on display in affected cities, with auto sales—which were already declining in 2019—flat-lining.

When SARS hit China in 2002 and 2003—with merely a fraction of the number of cases of the coronavirus—its global impact was low. China’s GDP was approximately 4% of total world economic activity then. Today, it is more than 17%. China’s share of world imports was less than 3% of the total then. Today, it is more than 10%. Despite its size, China in 2002 was a minor player in the global economy and sensitive to the actions of others. A common expression back then was, “If the U.S. sneezes, China gets the flu.” The dynamics are different now. China is one of the largest importers of the goods and services of most of the major economies, and now when China sneezes, the rest of the globe might need a doctor.

An illustrative case is the impact China’s auto production has on global manufacturers. More than 30% of U.S. car component exports go to China. China’s economic weakness will impact many companies around the world. The trade war was already impacting U.S. industrial manufacturing, with Caterpillar, Boeing, and John Deere seeing reduced consumption from China. The consumer side was sheltered to some extent, but now we hear that Starbucks and Yum Brands (Kentucky Fried Chicken) have shut their stores in Hubei. Indeed, this may be a very temporary move, but with valuations and complacency running at high levels, now might not be the time to be an outright optimist.

As the headlines get ever more dramatic, with parts of Italy and Korea also locking down communities, we have no idea if we are seeing peak levels of the virus, or if this is just the beginning. What we know, however, is that the epidemic comes when we, globally, are not in a position of strength. We are experiencing high levels of leverage, declining earnings in substantial segments of the market, declining business investment activity, lost momentum in job creation, and an ever-concentrated equity market that is hitting new highs. Greed, plus a tenor of complacency and a sense that central banks can and will fix whatever problem arises, seem like a bad combination.

Our interpretation of the economic signals continues to suggest that the underlying fundamentals do not support the ebullience seen in the pricing of investment markets. We are long-term optimistic, but we expect to continue to find value in short, temporary periods of enhanced conservatism. With the deterioration in the market signals, we think conserving our energy (i.e., holding cash levels in the 40% range) is the best way to reach our, and your, objectives.