Value is the Product

Value is the Product

“It takes a long time to become young.”

The team at Auour has been enjoying reading Value as a Service, by Rob Bernshteyn, the CEO of Coupa, a rapidly growing software company. Its premise is that companies need to move from selling products to selling value, and although the book focuses on the technology industry, Bernshteyn’s insight applies to any business. It certainly reinforces the objective we have had for Auour since our founding. 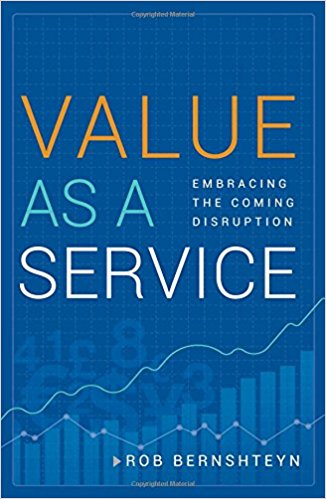 As we celebrate our 5-year anniversary this year, we have been reflecting on our own firm’s mission and the direction the investment industry as a whole is moving vs. where we’d like it to go. We think our industry has moved away from the basic goal of our client base: to reach the full potential of the public investment markets. Instead, our industry is focused on…our industry. The old guard running most of our industry wants to keep the profits rolling in, pursuing shallow objectives and using catchy marketing campaigns to brighten and simplify the story. Before we address how Auour views the challenge this poses, let me share what we think we have learned from Bernshteyn.

In Value as a Service, Bernshteyn says well-documented and measurable goals are critical when you embark on a mission. Without them, you won’t have a way to measure success and the value you’ve added. When a firm defines goals in terms of how many products are sold, the company’s collective thinking takes place within a silo, limited to a focus on things like product specs and features. What should be the goal—adding value to the customer—isn’t considered, to the end-client’s peril.

Over the past ten years, the software industry has moved away from selling products to selling solutions. Bernshteyn says now it’s time to move further still, to selling value. He describes some principles that will help decision-makers move ahead. We want to highlight these three:

We interpret these principles to mean that we should first identify the value we want to provide and then architect, from the ground up, the process and toolset to obtain that value.

Which brings us to the issues we have had with the investment industry.

Up until 2008, most people in the investment industry were focused on being or finding the best something manager—the best momentum manager, the best large cap manager, the best high yield bond manager, etc. All attention was on bringing out products related to these niches, ignoring the fact that history teaches a different lesson, namely, that the vast majority (more than 80%) of managers have failed to beat their benchmarks consistently. In other words, the industry was pitching products, not value. They lived within the old confines of the industry, ignoring the changes made that have brought efficiency to the investment world.

Auour’s evidence-based approach, known as regime-based investing, is different. We know through research that the largest inefficiency in investing is in market participation and asset allocation. (Both empirical and anecdotal data indicate that these features are controlled by the fear and greed of the investing public.) Our industry has traditionally left participation and allocation decisions in the hands of the investor—not the best approach if your goal is to realize the full potential of the market. We have stated from the beginning that significant opportunity is lost because human nature causes many investors to do the wrong thing at the worst time. This effect has been measured to limit gains by as much as a quarter of the market’s potential. This 25% delta in market potential that most investors don’t realize—this is the value Auour aims to deliver.

Through our innovations in regime-based investing, we believe that value can be derived from gauging the risk in investment markets (i.e., the changes from greed to fear and vice versa). To date, that approach has worked at mitigating losses without the need to sacrifice much, if any, of the markets upward movements.

So why the quote from Picasso?

In his early years, Picasso showed great skill, yet he didn’t feel he could leave the confines of tradition until his later years, when his confidence allowed a self-directed approach. We at Auour know that feeling all too well. We spent the first half of our careers living within the confines of traditional money management. Not until our team members were in our late 40’s did we have the confidence to follow what we now believe is the true path to investing, directing our attention to the untapped value of regime-based investing.