“The art of simplicity is a puzzle of complexity.”

The fourth quarter ended in rough shape with major equity markets around the globe experiencing one of the worst ends to a calendar year. Equity markets peaked in September when many hoped the U.S. growth engine would be able to lessen the pain from international uncertainty. Unfortunately, that did not last as trade concerns grew and international economic reading deteriorated. U.S. growth companies were particularly hit hard. With their high exposure to international markets and being some of the biggest beneficiaries of global trade, market participants decided that the risk of holding them was too large.

Growth companies experienced a 15% decline from the prior quarter end but, even with the correction, outpaced their value peers over the year. The gap between growth and value that we highlighted in our 3Q18 report shrunk but continues to be historically high. Smaller companies continued their underperformance as liquidity drained from the equity markets and investors moved to a lower level of risk tolerance.

The softness throughout 2018 in the U.S. Treasury market reversed as investors looked for protection. With the increasing concerns of a soft global economy and no signs of runaway inflation, interest rates fell as investors rand for safety.

Fear took hold in the fourth quarter, replacing the high level of greed being displayed entering 2018.

Hopefully, with the end of the year came down time relaxing with your family and friends. For many of us, a sideshow at these gatherings is the jigsaw puzzle table. When you do your part assembling the 2,000 tiny pieces into the picture on the box, next time you might be struck, as we were, by the similarities between doing puzzles and investing.

With only a small sliver of the picture on each piece, intricate puzzles are overwhelming. The process (or at least the best process we have found) is to begin with the edges, which gives you somewhere to start and creates a frame to which you can tether the rest of the pieces. Next, we piece together distinguishing elements of the picture—the yellow bridge and the red pagoda, say, not the sky. With the picture framed and the major elements defined, filling in the rest of the puzzle just comes down to patience.

Circling the puzzle table, looking for that one piece with the perfect combination of blue and pink, is a lot like investing, although with investing, the picture is constantly changing. Over the last year, we defined the frame of the investment landscape: a market entering a period of increased instability, yet with the U.S. financial system healthy, thereby making a material and enduring downturn unlikely. More recently, we have been describing the important features of this market, recognizing the relative strength in the U.S. vs. the growing weakness in many international markets and acknowledging the fear that we might be seeing a headwind for all.

At Auour, as we filled in the distinguishing elements of the puzzle, we became more defensive, adding increasing levels of cash to portfolios. Today, we have entered the period requiring patience, where we painstakingly fill in, or—in the case of hyperbolic investment headlines—discard less-than-useful data until the picture is clear. We have reached a time when caution is warranted, but the odds tell us that the worst is likely over. We are waiting to see how the remaining pieces fit together, and the picture becoming clear will catalyze our full re-entry into the market. 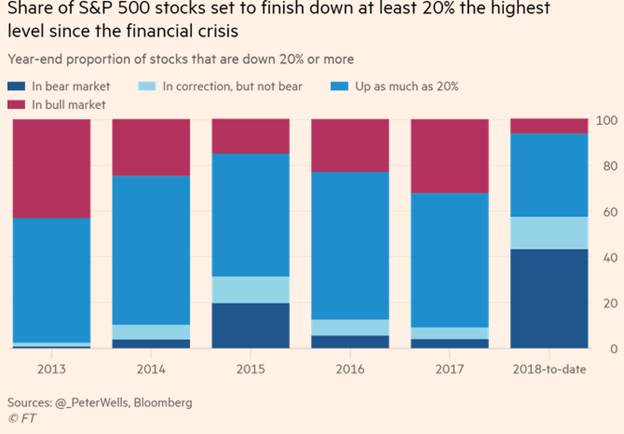 December was an ugly end to 2018. The stock prices of a large swath of companies entered bear market territory (i.e., were down more than 20 percent). Much of that move was driven, we think, by a fear that the good times were ending and darker times were staring us in the face. We don’t think that fear was justified by the volume of data at hand. We see most of the movement as fear.

Our current reading of the data signals, with no guarantee that it will continue, is that the U.S. has structural strength that should provide valuation support to the market.

Let’s look at some of the pretty parts of the puzzle.

Unemployment is lower than it’s been since 2000, and wage growth is accelerating. This profile is not something that we historically see immediately before an economic downturn. In past episodes, fundamental factors start to weaken, signaling a buildup of instability within the consumption figures. The current metrics do not yet signal that stretched scenario. 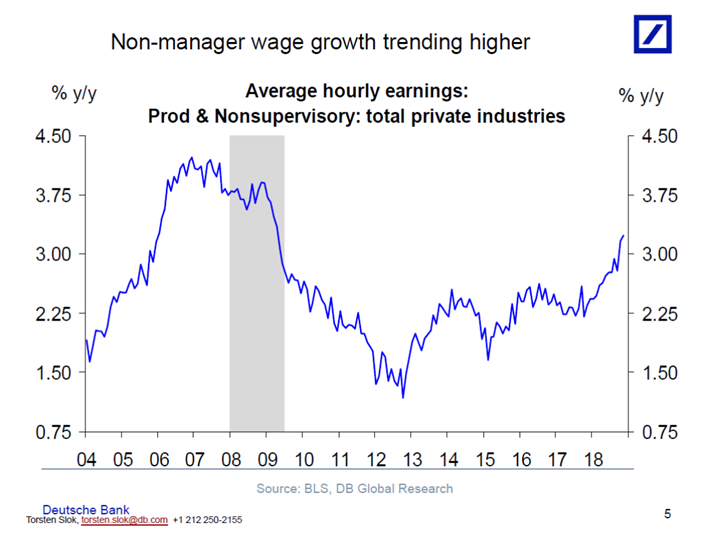 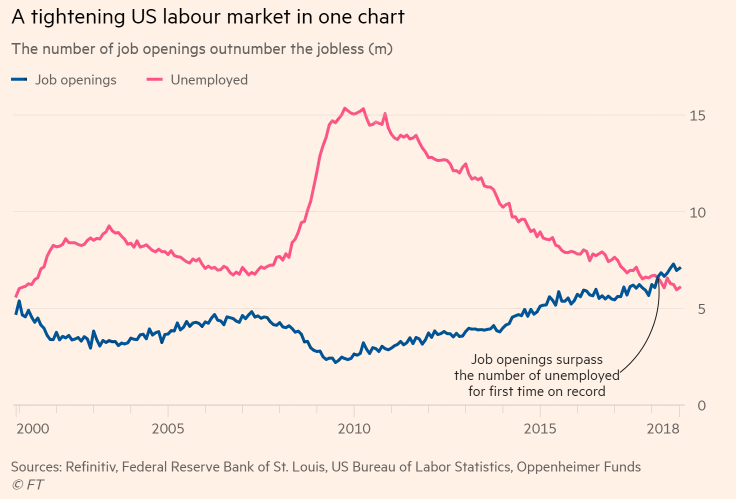 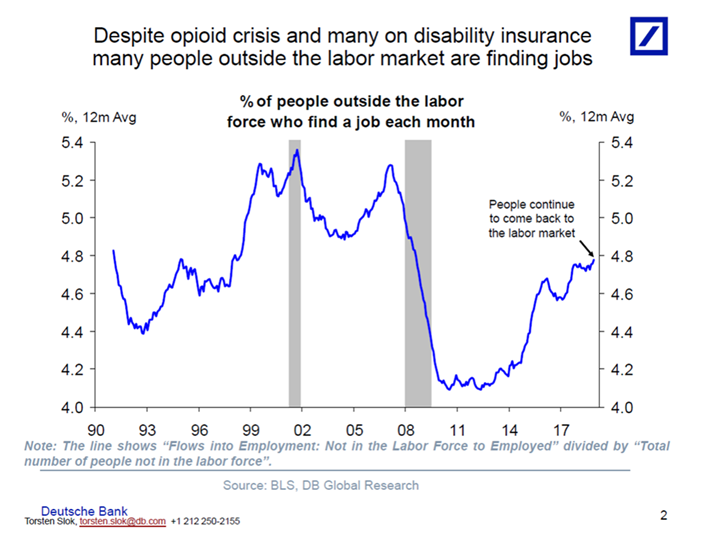 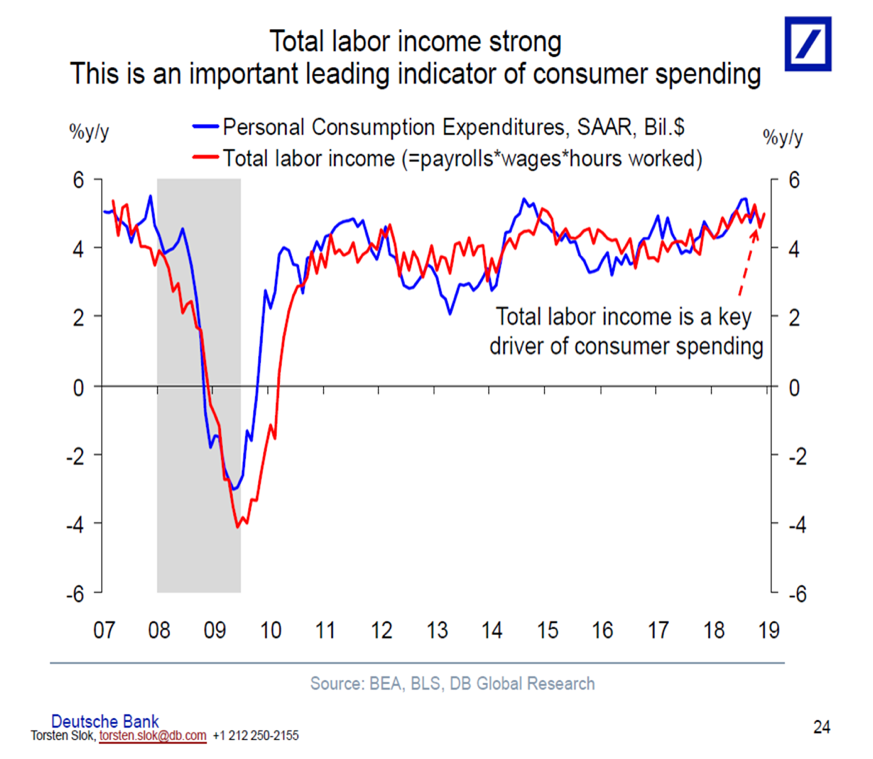 Another important element in the investment picture is current valuation. With the significant stock price declines we saw in the fourth quarter, valuation metrics have declined to a historically favorable position. We remind you that valuation is not a signal we use for timing changes in position. Rather, it expresses the longer-term attractiveness (or risk) of the markets. Though not at historic lows, valuation measures today have declined to a point that argues we should be thinking about re-entering the market rather than exiting it. This is especially true when you consider the state of the bond market and the interest rates it is generating today. 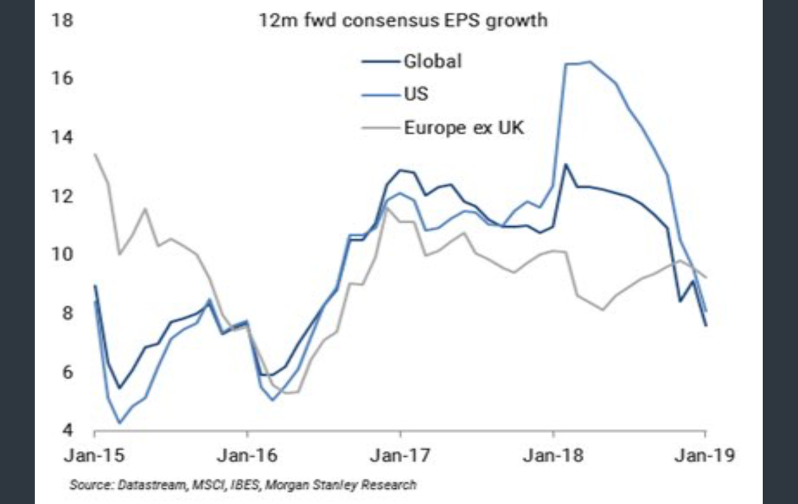 Many refer to the Fed Model to assess relative attractiveness. This model considers the amount of earnings generated by the market, divided by the price to obtain those earnings, and then compares it to the 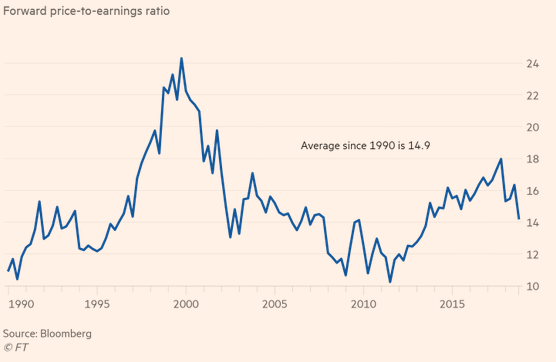 current interest rate of the 10-year Treasury bond. With the U.S. equity market having an earnings yield of 7 percent, and the Treasury at less than 3 percent, the equity market appears to offer the better opportunity. Yet, as we have said, valuation is not a good enough reason on its own to enter or exit the market.

Why? Because earnings expectations will fluctuate. And, at the time of this writing, expectations have been falling in the U.S. Although some will consider what follows a doom and gloom attitude, it is important to realize that the growth in earnings in 2018 was high given the new tax laws. And because that earnings bump will not repeat itself in 2019, it’s understandable to expect the growth rate to decelerate—decelerate, not decline. We still expect to see growth, just not at 2018’s pace.

Much of this report has focused on the U.S. It is the element in our puzzle that brings the most clarity to the global mosaic. Rarely does any other region impact the world markets as much as the U.S. Other markets might dent the growth profile, but rarely do they cause enduring damage to the earnings of the investable universe.

If Europe were a section of a puzzle, it would be the busy but incidental component. Europe has seen a lot of headlines, and no doubt has internal issues to resolve, but the range of possible outcomes to various European quandaries should not have much impact on the average investor. Brexit and Italy have been favored topics, and a recent slowdown in Germany is adding additional concern to the continent’s growth in 2019.

Capital Economics—a well-respected macroeconomic research firm—specializes in long-term growth forecasts, and they predict little change in growth for Europe in the future. Demographics, and the burden of the state, limit swings in growth rate. At Auour, we continue to be underweighted in the developed international markets, especially Europe, because few positive catalysts exist. However, valuations have come down such that any change in our outlook will likely be towards increased exposure.

With some puzzles, there can be a major element that might not have much to do with the rest of the picture—it sits in isolation such as a cloud in a blue sky. In this extended metaphor of ours, that’s China. We certainly have been paying increased attention to China, and our conclusion, at this point, is that its economy is interesting but not yet very impactful to the average investor. And, with what we see, we prefer to avoid material exposure to it. 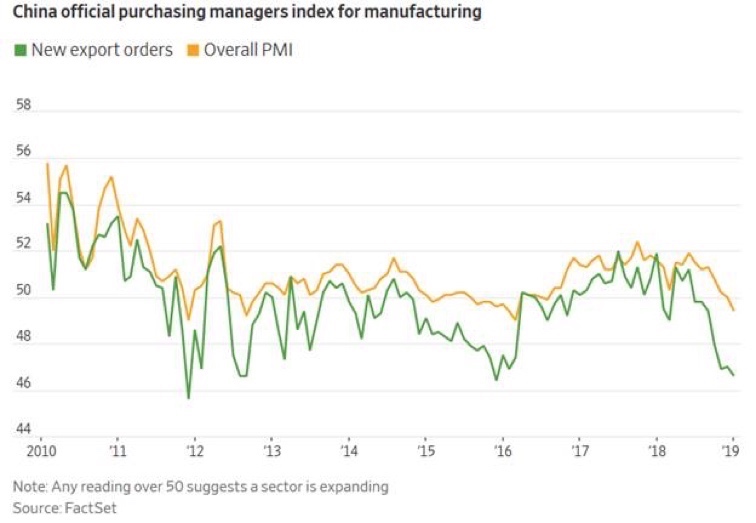 With Emperor Xi’s assent to the leadership role, China has made significant moves back towards the Communist Party and authoritarianism. The party has been on an aggressive debt issuance cycle, and many distinguished researchers see that as the leadership’s attempt to maintain control.

Much of the growth in debt has been within the state-owned corporate space and was funded through the internal savings of the population. We have written about the rapid growth in WMP’s and the expected guarantee of their savings by the central government. In 2018, China saw a material increase in defaults and the removal of ancillary parts of the lending machine (peer-to-peer lending being one example). Consumer spending decelerated significantly in 2018, as seen with many of the luxury consumer goods producers. (Apple is one example, but it is far from the only one.) It remains unclear if there is a connection, but our guess: there is.

Because of the internal funding of China’s debt, similar to Japan’s and Italy’s, we do not see any bursting of that bubble to be a large-scale shock to the world. Instead, we see it as a slow bleed that will take decades to correct. We go back to the Japanese example for context: It was the second-largest economy, but, over the last 30 years, has become the fifth largest. It is still very wealthy, but demographics and the slow rebuild of their banking system have together placed them in a position of relative weakness. Today, China faces tough demographics, an inflated banking system, a shift back towards authoritarianism, and a lack of new growth opportunities. Its outlook is not attractive to us.

Market sentiment experienced significant change in 2018. From expecting synchronized global world growth to fearing economic ruin, the shift to the negative became pervasive. The puzzle pieces, as assembled so far, however, look like something less dire. Concerns around the world are valid, but the most important engine, the U.S. financial system, appears solid, and the signals are more positive than negative. World events and jockeying amongst world leaders can always produce unpredictable troubles, but we need to remember the world has lived through much more dangerous times. Ask your grandparents.

Our models acted as expected, turning cautious in the early part of 2018 prior to the market turmoil that hit hard in the fourth quarter. Though investors are anxious, our models are starting to show light at the end of this tunnel. We have confidence in the stability shown by the Auour Regime Model, and we wait patiently for the catalysts that will cause us to adjust our positioning.