Wins above replacement (WAR) is a baseball metric that describes a player’s value in terms of how many more wins he brought to his team than a replacement-level player at his position would have. It is a measure of the effectiveness of an individual within the team and a statistical attempt to quantify if he is worth what he is being paid. Ranking players by WAR might seem harsh, but a company’s resources are finite; it has to deploy its capital strategically and responsibly.

The same can be said for selecting suppliers and partners. Replacement of a supplier may not be easy but the cost not to can be large. Too often, conversations about trade focus on the increased prices consumers will pay for imported products. This view is a static one, which assumes a customer cannot go elsewhere for a similar or equivalent product. 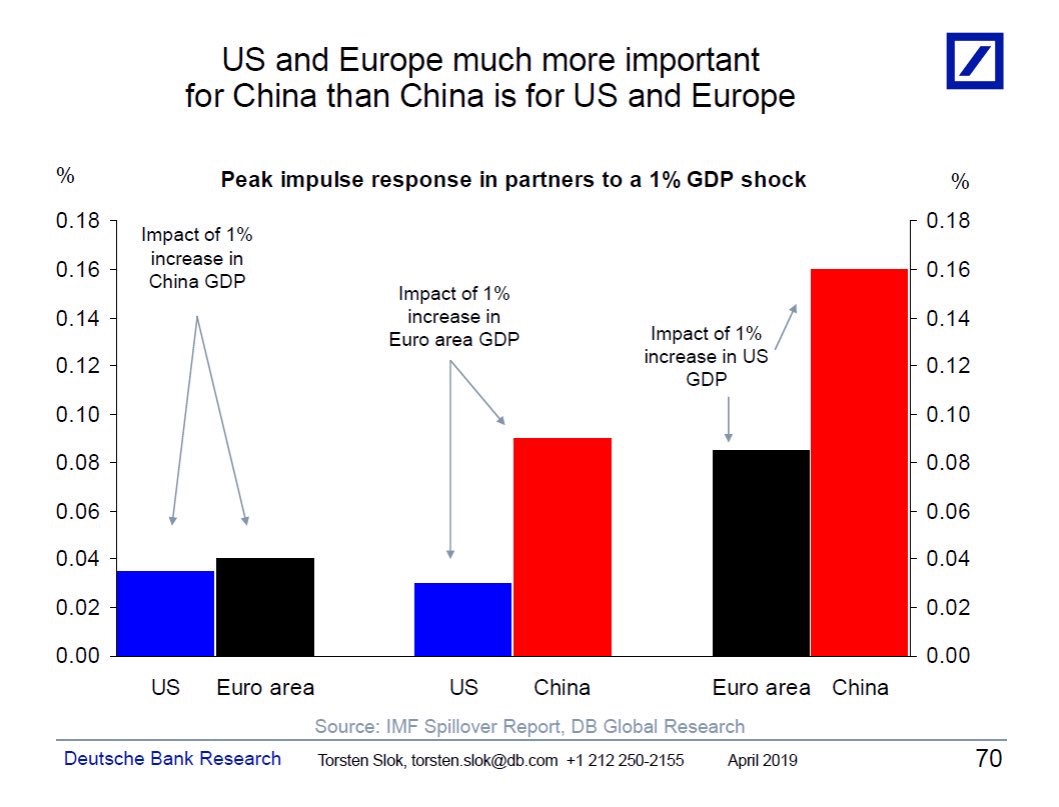 The U.S. equity market has recently hit new highs, yet we stand defensively positioned. Though many investors have forgotten the fear they felt back in December, we have not. And we also do not forget the pain that can come from a global shift in supply chains and the knock-on effects it can have while the new normal is found.

Although many media outlets express concern about the U.S. economy, it is China where we see the real potential for dislocation. In the above graph, the magnitude of China’s dependence on the U.S. and Europe as a marketplace is obvious: A change in the U.S. or Europe’s GDP has an outsize impact on China, and a far greater impact than China has on either the U.S. or Europe.

Michael Enright, of Enright, Scott & Associates, has dug deeper, and he finds the change in China’s relevance to global trade may lead to a much larger issue for the country. His research suggests the high-level data does not accurately characterize the level of China’s dependence on its export market. Close to one-third of China’s GDP is tied to exports, especially those exports being purchased by U.S. companies. And more than a quarter of the Chinese workforce might be at risk if China loses that business. As just one example, Enright estimated that Proctor & Gamble accounted for $11 billion of China’s GDP and more 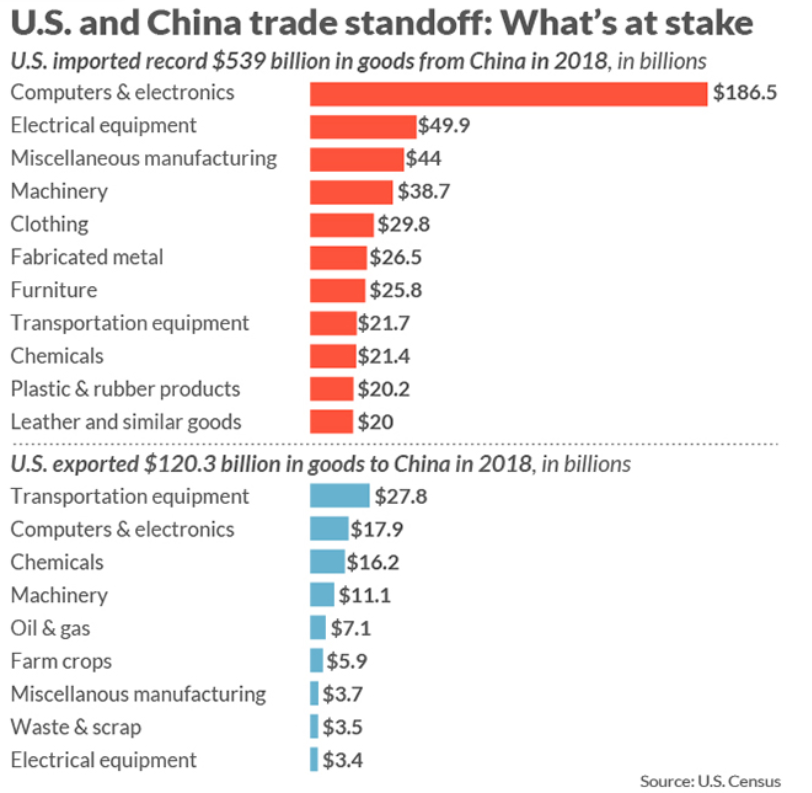 than 600,000 jobs. And P&G isn’t even a participant in China’s largest export sectors.

China’s most significant exports are in the technology sector. Mobile phones and computers alone account for roughly one-third of the goods they export. What makes this so interesting? Most of the value-added materials used to manufacture these products are not made in China but are brought into China. Chinese factories are merely doing the assembly. In other words, the skill added to these products in China is low, relative to the contributions of other countries. Note that China imports over 80% of its component needs. 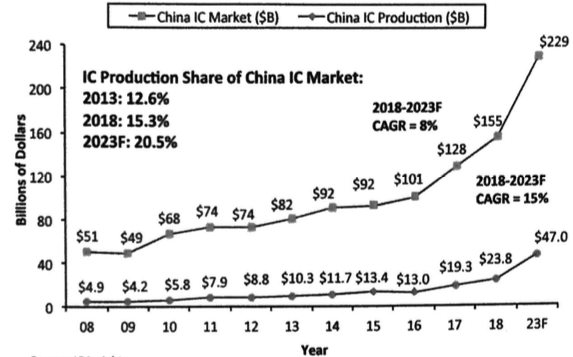 (To learn more about what makes up the more than $500 billion in goods the U.S. exports from China, visit this wonderful website).

Providing labor and a large assembly floor is not a long-term, defensible export strategy for any country. And because many of the firms contracted to assemble the exported technology products are themselves not Chinese, it is unsurprising their allegiance is to the end client (e.g., Apple, Google, IBM, and Dell) rather than to China. We think the relative and recent export growth of Vietnam compared to China is evidence in service of this hypothesis.

Vietnam and India are already both beneficiaries of the repositioning of global supply chains. Labor is cheaper, and intellectual property protections are better, in these countries and many others than in China. And we believe these countries can take business from China much faster than many expect. With the threat of a trade war having loomed already for more than a year, many Western firms have been working on alternatives to China. It may come as a surprise, but it won’t take many companies switching where they go for product assembly to significantly impact China. Of the $530 billion in goods the U.S. imports from China, Walmart constitutes $50 billion of the total, Apple likely more than $20 billion, and Dell and other computer manufacturers probably another $20 billion. Therefore, roughly 20% of total exports from China to the U.S. are purchased by only a handful of companies. The graphic below illustrates how quickly and easily it has been to back away from China as a supplier. 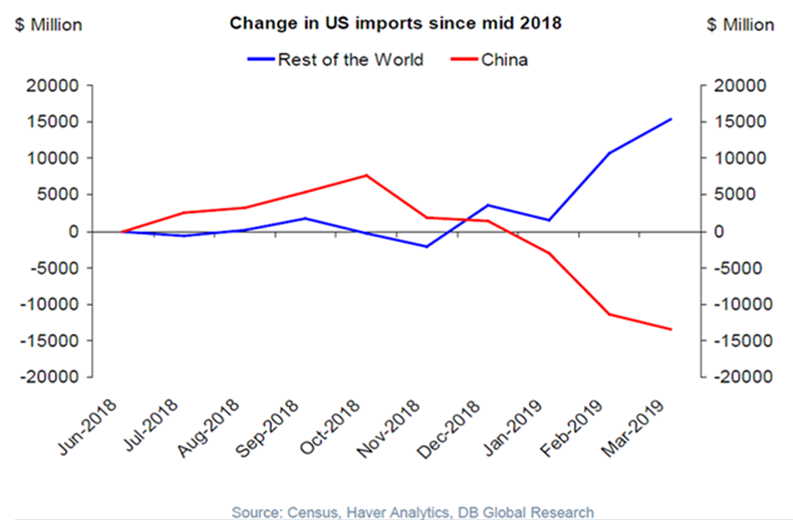 With the trade talks evidently deteriorating, and with both sides digging in for a long fight—China’s state-owned media has referred to the trade war as “the People’s War” and there’s even a trade war song—the only lever China has to counter tariffs is devaluing their currency. In other words, China must cheapen labor to minimize the impact of tariffs. However, the devaluation would have to be significant, as depicted in the graphic below. 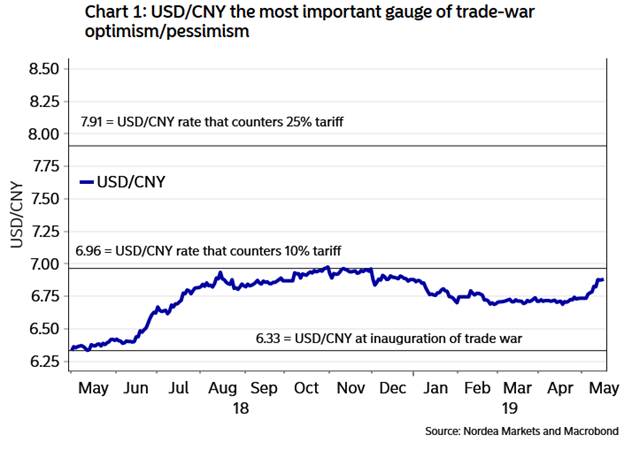 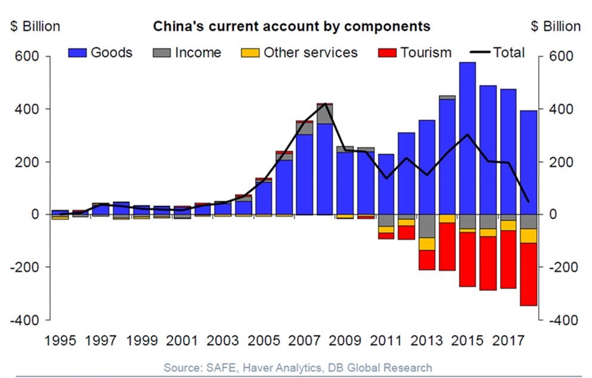 But as with any manipulation of market forces, the unintended consequences could be large and unwieldly. Those with significant savings denominated in yuan will experience a material drop in purchasing power and start looking for ways to protect their savings. In fact, the data are already telling this story: “tourism” has been a large export for China, but many economists see it truly as a measure of Chinese citizens exporting their savings to dollars via Canadian and U.S. real estate. 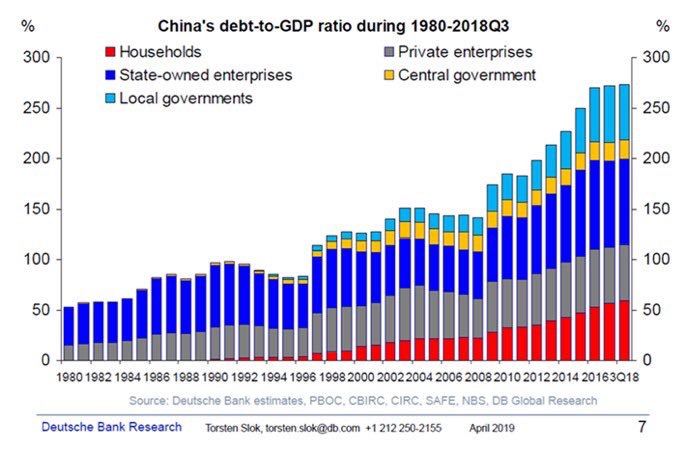 The flight of capital is the one thing a centrally controlled economy like China’s cannot withstand. Although China might try to block the export of citizen’s savings, few regimes have been successful in this. It typically leads to high levels of inflation and, eventually, revolt. Look no further than Venezuela and Turkey. 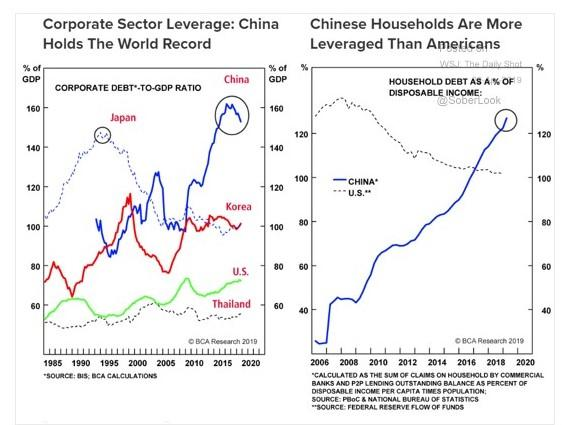 Currency devaluation can also become a pain point relative to debt. For all that China’s growth has been trumpeted over the past three decades, it has also amassed an overwhelming amount of debt across government, corporate and private sectors. In almost all ways, China has become one of the most leveraged economies, which is not a great position to be in if the economy starts to show stress.

Stress can show itself in many ways, with unemployment and the loss of income being two of the most significant. However, rarely do investment markets wait for that to happen. As we have mentioned in past newsletters, a signal our risk model takes very seriously is risk aversion that shows up in the credit markets. In past severe economic downturns, the rising cost of debt for highly indebted economies presented itself prior to the actual downturn. We believe we see this rising cost of debt now in China. The cost of low quality debt is soaring to levels not seen since the great recession.

What makes this even more worrisome for China is the amount of dollar-denominated debt that needs to be re-financed in 2019. An estimated $1 trillion in Chinese debt needs to be recycled this year. If the Chinese economy slows materially, and the yuan devalues, it will be increasingly hard to find willing participants to buy those liabilities. Already, in an economy that supposedly grew over 6% in 2018, the number of Chinese debt defaults quadrupled with the pace continuing in the first quarter of 2019. 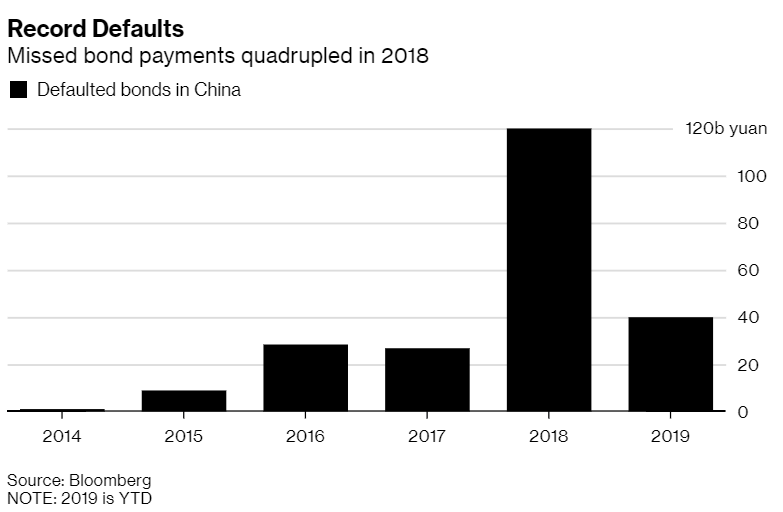 If you were in Apple’s shoes, the wins above replacement score for China is a solid negative – meaning almost any other country would be better. Higher costs due to tariffs, intellectual property risks, increasingly hostile regulators can all be avoided with a supply chain that avoids China. The transition is not painless, especially for some of the largest U.S. companies, and we believe all should take a more cautious approach during this adjustment.

As mentioned at the beginning. We maintain a defensive position with cash levels between 20 – 30% and significant underweights in international assets. With uncertainty in trade, a soft international marketplace, and the unknown impact a softening China could have on the world markets, we see the wins above replacement ratio to be favoring some cash on the sidelines.