Wealth can be created and destroyed. Wealth is created when the investment of time, money, and energy arrives at an endpoint where the profit obtained is greater than the investment made. A simple example: you give your child ten dollars, allowing her to purchase supplies to open a lemonade stand. She builds the storefront, stocks inventory, and perhaps employs her brother to operate the store. In return for your investment, she pays you back plus a handsome dividend (unless you drink all the profits). She is thus rewarded with a profitable ongoing business, and you have maybe twelve dollars instead of ten. Everyone wins; wealth is created.

Now, think of the opposite: The investment is provided. Decisions are made that do not lead to profits. Costs run higher than the value of services offered. The business shuts down with unsold lemonade in your fridge and a storefront worth less than the original cost. Wealth is destroyed. No one wins. 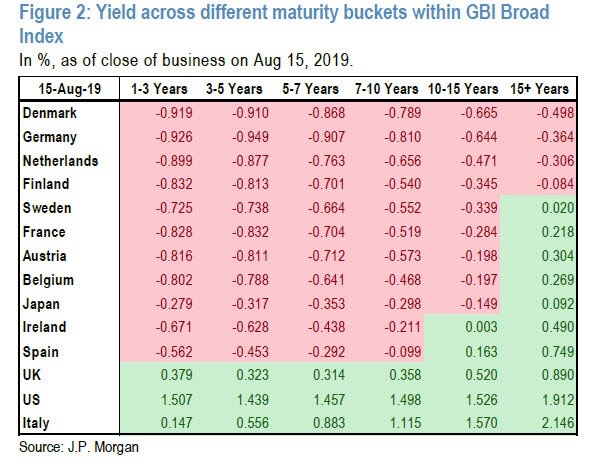 Lose-lose—that is also the best way we can think of to describe the negative interest rates of most developed countries’ debt. There is now more than $17 trillion in debt trading at negative rates, up another trillion from a month ago. Twenty-five percent of the globe’s fixed income instruments now cost more than they will return.

To hammer the point home: Negative rates simply mean that you give money to someone and they promise to give you less in return at some point in the future. There is NO chance that they will give you more. ZERO. Have we made this clear yet? (Can you tell we find this offensive?) If you give a dollar to Germany or Switzerland today, they promise to give you ninety-nine cents back in a year.

You might well ask, “Why would anyone do this?” We point you to the following conversation relayed by Charles Gave, one of our favorite economic thinkers, in early July.

“When meeting some clients a few weeks ago in Amsterdam, I made my usual remark about the stupidity of negative interest rates. In response, my host told me a sobering story. He manages a pension fund and had recently started to build large cash positions. One day, he was called by a pension regulator at the central bank and reminded of a rule that says funds should not hold too much cash because it’s risky; they should instead buy more long-dated bonds. His retort was that most eurozone long-dated bonds had negative yields, and so he was sure to lose money. ‘It doesn’t matter,’ came the regulator’s reply, ‘A rule is a rule, and you must apply it.’”

Governments around the globe are selling a product that promises a lower value than the original investment, and they are forcing investors to buy it. Let that soak in. If you are like us, you might want to pause for a drink.

No longer are governments limiting their taxing authority to income. They are now blatantly coming after the savings of their citizens. They issue debt at a value above that which they will return sometime in the future, sucking wealth from those forced to buy it. (Hopefully, it’s sinking in why we are so offended.) 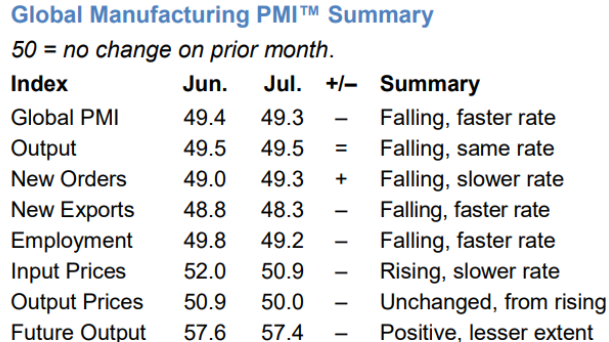 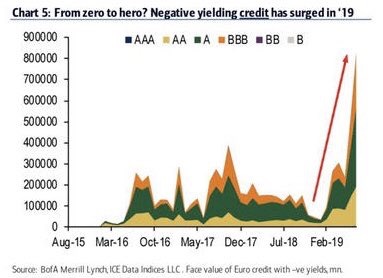 Even more troubling is that this phenomenon of negative government debt has caused corporate debt instruments to follow suit. They are increasingly moving into negative-yield status. Approximately $1 trillion in international corporate debt now has negative rates. Unbelievably, not only higher quality debt is offering negative income; some riskier bonds are, too. Can you imagine buying a BBB-rated bond that provides no income and yet returns less at the end of the term? Remember, the rating—in this example BBB, which is far riskier than AAA—is meant to describe the chance of the bond defaulting and not paying back the principal in full. So, just to make sure we haven’t lost you: People are buying corporate debt instruments within the international space that provide no income and if everything works out, will pay them less than they put in. That’s the best-case scenario.

If all of this isn’t odd enough, the world’s economies are showing increasing weakness. The Global Purchasing Managers’ Indexes (PMIs) are declining, and the subcomponents do not suggest the slowdown is easing. A PMI below 50 indicates contraction in manufacturing activity. Not only do we see contractions, but over the last few months we have seen the contractions accelerating. The readings are not isolated to any one region. All regions are slowing or contracting, with the U.S. now finally joining its global brethren. (The U.S. manufacturing sector had been the lone holdout. In July, that changed.) Could this be a mid-cycle slowdown, one that might be followed by a pickup? Maybe. But keep in mind that Brexit is supposedly happening this fall, energy prices are dropping (bad for one

of the bigger investment categories) and, wait for it… wealth exposed to negative interest rates is rising. Nothing says uncertainty like the certainty of losing money. 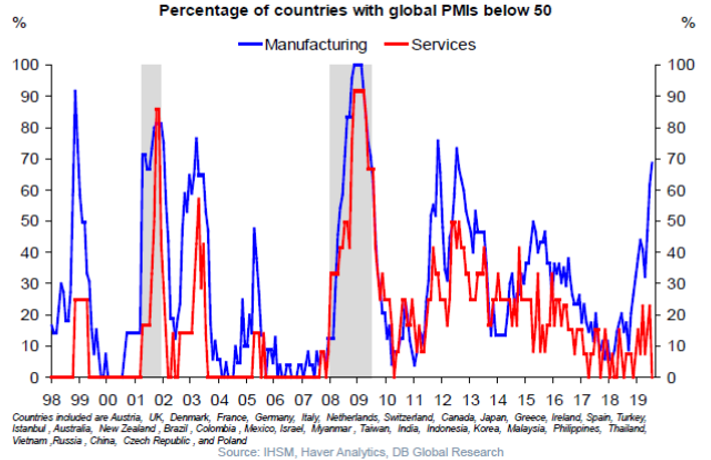 Some will rightfully point out manufacturing is an ever-smaller part of the U.S. economy, with most jobs residing in the services sector. Hopefully, that lowers the likelihood of a recession. However, history would not take that side of that bet. Economic activity within the services sector has historically followed the manufacturing sector. Could things be different this time? Yes, but it doesn’t argue for a carefree attitude and a fully invested stance, in our opinion. 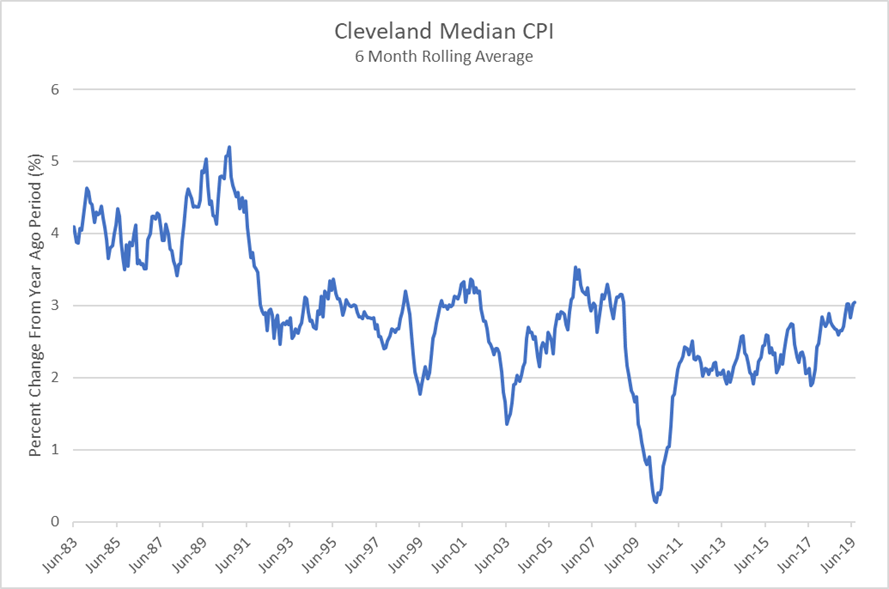 We find a large discontinuity between the direction of interest rates and that of inflation. Although there are several measures of inflation, most of them tell the same story: inflation is rising. Each branch of the Federal Reserve has its own viewpoint. The Cleveland Fed publishes the often helpful “Median CPI.” By removing the outliers within the dataset from the picture, it attempts to look at core inflation. We are currently in normal inflation territory, so history argues for rates almost double what they are now. Instability is evident. We don’t believe this discontinuity can sustain itself.

We have mentioned the growing issues surrounding the U.S. (and we do literally mean surrounding), including trade disruptions, weakening international markets, and negative interest rates in most developed nations. These issues appear now to be spilling over to the U.S. To what extent is still unclear.

What we do know, though, is that money and its value are dying in most developed countries outside the U.S.

The degradation in the economic signals leads us to a protective stance, with high levels of cash and short-term treasury bills (i.e., 40 to 50 percent of portfolio assets), and gravitating toward large, historically more stable, cash-generative companies. With increasing uncertainty bleeding into the picture, now is not the time to be complacent.

Addendum: A Tie for Wackiest Chart of the Year 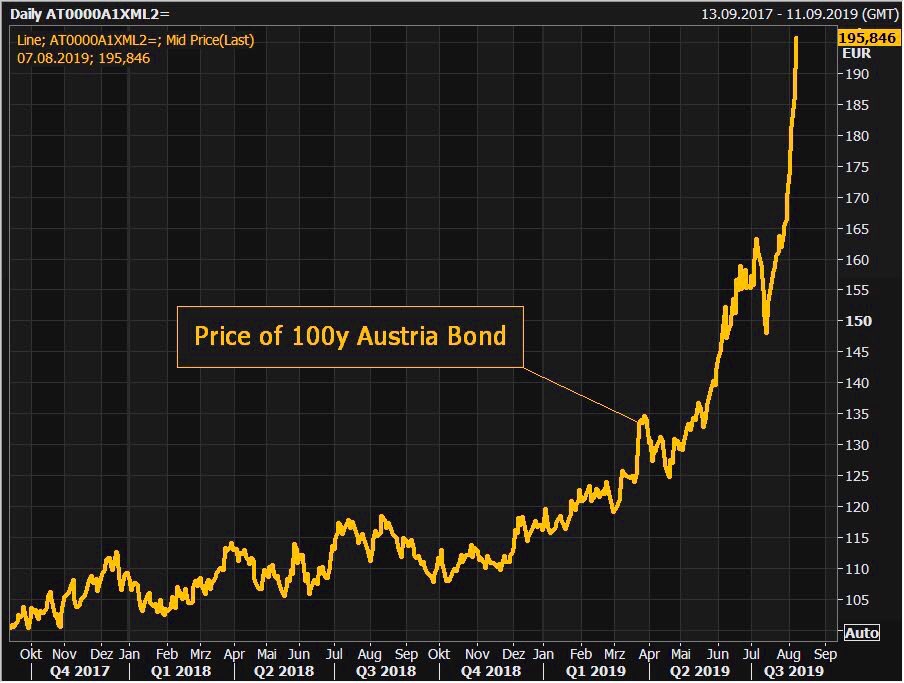 The first chart below is the price of the 100-year bond issued by the Austrian government in 2017. It has doubled in the past 2 years. (We hear Jeff Bezos, CEO of Amazon, is feeling inadequate.)

The second is a 12-month price history of the same Austrian 100-year bond and the 100-year bond issued by Argentina. It lost close to half its value overnight when the president lost an election, putting the fiscal stability of Argentina at risk of another bankruptcy (they have had at least three in the last hundred years. Note how fast perceptions of value can change.

This report is for informational purposes only and does not constitute a solicitation or an offer to buy or sell any securities mentioned herein. This material has been prepared or is distributed solely for informational purposes only and is not a solicitation or an offer to buy any security or instrument or to participate in any trading strategy. All of the recommendations and assumptions included in this presentation are based upon current market conditions as of the date of this presentation and are subject to change. Past performance is no guarantee of future results. All investments involve risk including the loss of principal.

All material presented is compiled from sources believed to be reliable, but accuracy cannot be guaranteed. Information contained in this report has been obtained from sources believed to be reliable, Auour Investments LLC makes no representation as to its accuracy or completeness, except with respect to the Disclosure Section of the report. Any opinions expressed herein reflect our judgment as of the date of the materials and are subject to change without notice. The securities discussed in this report may not be suitable for all investors and are not intended as recommendations of particular securities, financial instruments or strategies to particular clients. Investors must make their own investment decisions based on their financial situations and investment objectives.