– Where the Wild Things Are

Inflation, and our fear of it, is a highly debated topic these days.  It is worthy of attention given the role it plays in our economy.  With our economy’s dependency on credit, the economic system needs to be concerned about the direction of interest rates and inflation. 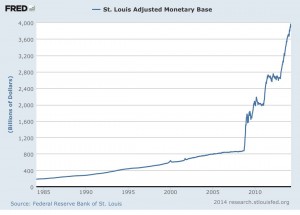 Milton Friedman, a great economist, once said that “inflation is always and everywhere a monetary phenomenon.”  The more money we have in our system, the higher inflation will be. With the significant growth of currency in our system as depicted by the Federal Reserve balance sheet (see graph above) there is significant fear that inflation is going to increase swiftly.  Given that the large increase in money happened over the past five years, a question asked by many is why has inflation not picked up as of yet?  We propose the following as one potential reason.

There is a myriad of theories on the cause of the financial collapse and we believe many of them have merit.  At the root of most theories is the world’s banking system. In short, the system broke. Over a short period of time, institutions became concerned that their peers could not make good on financial promises and it caused a modern day “run-on-the-bank”. These concerns were not related to the regulated side of the banking system but on the unregulated side known as the shadow banking system.

The regulated side of banking historically relied on people putting their savings with banks and the banks would then lend out that money to individuals and corporations. The idea was that they could collect a certain interest rate on the loans and pay out a fraction in the form of interest to those that had their savings held with the bank, with the difference being the profits of the banks. This is still true of small rural banks. However, this is not true of the large, globally-focused banks. Without delving too deep into this topic, large banks had to rely too much on their counterparts for funds in order to fulfill the demand they had for loans and services.  These demands were not met in the same way small banks funded their needs, i.e. currency.  Instead, they needed to rely on the shadow banking industry (money market funds, sovereign wealth funds, insurance companies and others) for funds through what is known as the interbank funding markets. Through this mechanism, ‘dollars’ are able to be created outside of the regulated banking system. The growth in this method of funding assets caused an instability in the system that became obvious in 2008.

We will deviate for a moment to discuss a theory that is gaining prominence.  Professor Perry Mehrling of Barnard College has presented an insightful lecture series that discusses that not all ‘dollars’ are the same.  This was further elaborated in a paper by Zoltan Pozsar of the U.S. Treasury.  The idea is that a spectrum of ‘moneyness’ exists and not all dollars are viewed with the same level of worth.  There are different types of dollars with the most trusted being the actual paper currency you hold in your pocket.  The next highest are the obligations of the U.S. government (T-bills, bonds, etc).  Following those categories of dollars are the obligations of the large banks and financial institutions.  Since banks are in many ways backed by the government, they have typically been viewed as safe versions of money and are also known as interbank loans.  The dollars that are not explicitly backed by the U.S. government are typically referred to as privately-backed dollars. They are dollars in that they can be spent and invested but they are only indirectly convertible into actual currency.

The level of trust in those privately-backed forms of money varies over time. In good times, little fear is in the system and the general public and institutions are willing to trust privately-backed money.  Similar to you lending a close friend $100 and having a high level of confidence that they would repay you tomorrow.  In weaker economic times, that trust can go away and can cause runs on the banks. Using the friend analogy, if they borrow $100 with the assumption of repaying the next day and you subsequently discover your friend quit his job and left town, you may start to discount the likelihood of ever seeing your money ever again. A similar scenario occurred in 2008 when, almost overnight, Lehman, AIG, and others were viewed with great suspicion in their ability to repay overnight, interbank loans with the ‘dollars’ they held on their balance sheets when only a few weeks earlier, they were considered ‘good as gold.’

The Global Run on the Bank

Leading up to the 2008 time frame, the growth rate of $800 billion U.S. money supply was increasing at a slow and steady rate. The actual level of dollars, or claims on the currency, in the system was growing much faster and approached $9 trillion, over 10x the amount of currency in the economy. This high amount of leverage, which is viewed as stable in a good economic climate, became suspect once the economy started to degrade.

A devastating economic climate occurs when there is a lack of trust between market participants. When one financial party no longer believes its counterparty can meet its obligations, transactions freeze.  When this problem is widespread, money stops flowing and new investments cease. This situation occurred in 2008 and no one wanted to trust banks (especially the unregulated ones).  The Federal Reserve observed this situation as a potentially crippling problem and executed a process designed for the regulated banking industry. However, it was the unregulated, shadow banking sector that needed the Federal Reserve’s help.  Over a period lasting nearly one year, the Federal Reserve doubled the amount of ‘currency’ in the economy in order to bring trust back into the banking system.  This was accomplished by purchasing these shadow banking assets in exchange for the best form of money in the system, Federal Reserve obligations. This process effectively took high quality assets that were producing adequate returns (but were no longer viewed as stable forms of money) and substituted them with the highest quality of Federal money. This is depicted in the graphic below.

Prior to the actions of the Federal Reserve, a very large economy was being balanced by a relatively small amount of actual dollars. With the substitution of these privately-backed, shadow banking assets with publicly-backed assets, trust slowly came back into the economy.  Accordingly, transactions started to occur and economic activity started to recover. 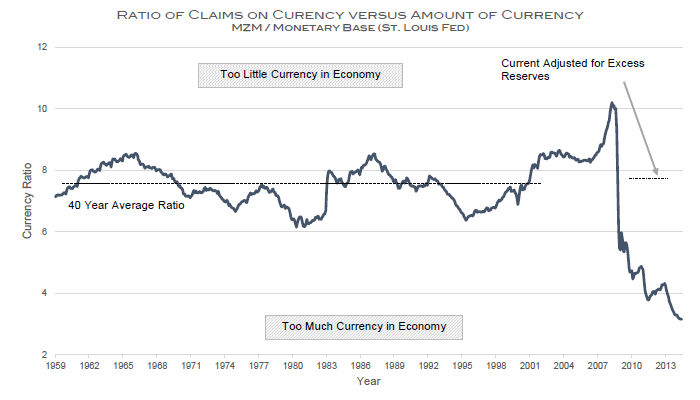 As shown in the graph above, the ratio of ‘dollars’ (both publicly-backed and privately-backed) to actual publicly-backed currency averaged close to 8x over the 40 years leading up to the new century. With the turn of the century came an explosive growth in global savings held in dollars.  However, the actual amount of currency did not keep pace, leading to more dollars with less support. With the Federal Reserves actions in 2008, this reversed swiftly and there is now nearly 3x as much coverage as compared to 2007.

Though many view this as new money entering the system (and therefore reminding everyone of the Friedman quote), to many global economists, these are not new dollars. It was the Federal Reserve’s substitution of higher quality dollar for dollars that were already in the system.  Since these were not new dollars in the traditional sense, it has not lead to the inflation that was anticipated.