This is a phrase we heard a lot on our last visit to London. Though repeated as the subway doors open, it brings other ideas to us. Specifically, the gap between the expectations of some investors and what turns out to be the reality. All bubbles eventually “pop” (or at least deflate). Among other issues highlighted in this issue of our newsletter, we ask investors to consider that all assets follow a cycle, but not all assets follow the same cycle; a broader viewpoint may be necessary for distinguishing a cycle’s characteristics.

“The market always does what is least convenient for the most participants at that time.” – David King, portfolio manager at Columbia Threadneedle

Investing in financial markets brings on many uncertainties. Valuations, a critical element to our investment positions, are built on expectations of the future potential profits. We spend a large part of the day reflecting on the resulting expectations built into global markets, looking for those areas where the gap between expectation and reality move to extreme levels.

Prior to listing them, we thought it important to review the various stages of bubbles as the gap between expectations and reality can drive markets there. Probably the most important item to remember; bubbles spend more time expanding than they do deflating. The cynic may be right in the end but those on the positive side can typically look right longer. Be careful as it can breed over-confidence. So, be warned, in the end, bubbles pop. 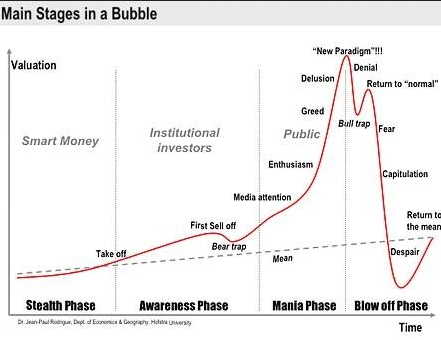 Bubbles can impact many aspects of life but those impacting the financial markets grab our attention. We found the graph from Credit Suisse (shown below) interesting. Looking back across many historical asset peaks, today’s global equity markets appear tame. One should not take this as a reason to be bullish, yet it does seem at odds with those signaling imminent doom. 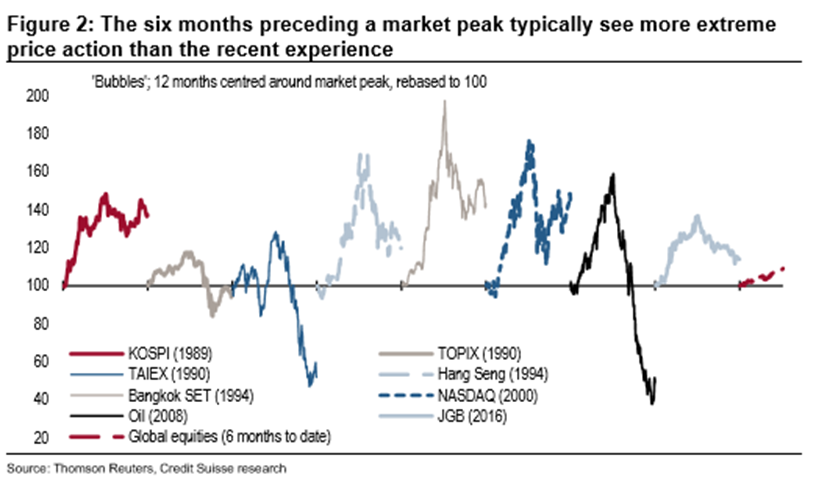 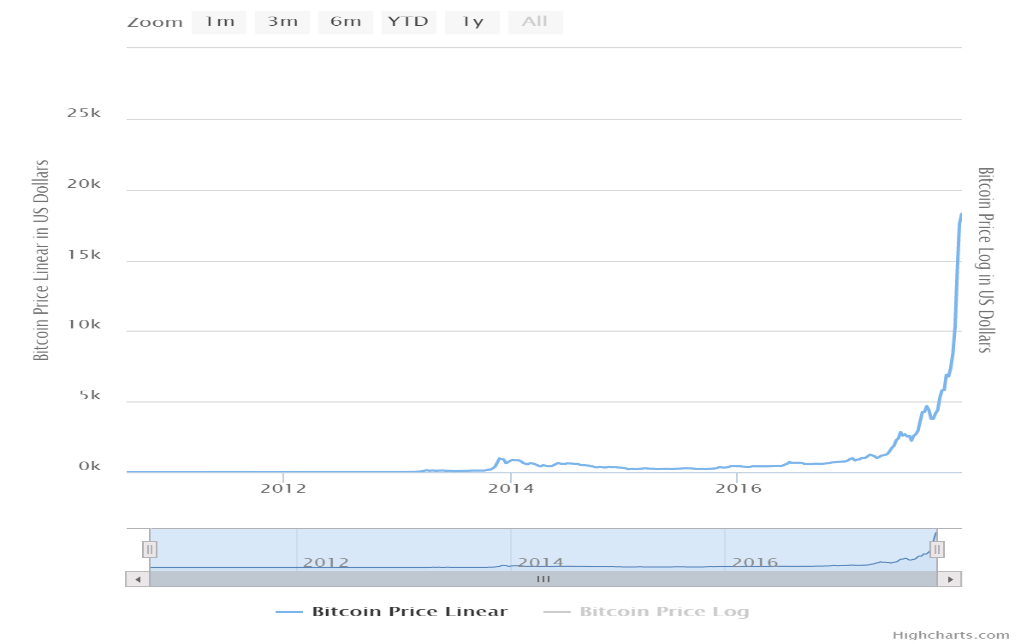 According to the Financial Times “The Japanese exchange at the heart of bitcoin’s recent surge has said its investors are fueling the cryptocurrency’s feeding frenzy as they buy in with leverage up to 15 times their cash deposit”.

We cannot recommend anyone look to Bitcoin as an investment.  We realize that we are on the older side and may not ‘get it’ (the only defense we have heard from proponents), but we would like to think that our relatively deep understanding of technology, company business models, and asset valuation methodologies have built up our understanding of the potential of it and its crypto-currency offspring (tether, ether, etc).

We would suggest reading this article as an indication of the lack of transparency and risk involved with Bitcoin and its brethren.

As it pertains to block chain, it is a technology that many can build around. Opportunities exist to utilize it for new products and services. However, we suggest leaving that to the venture capitalists at this point. Just our two bitcents… 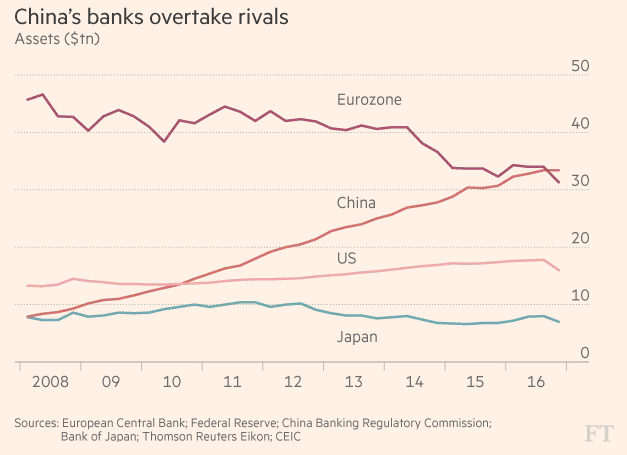 China’s banking sector has become the largest in the world, with assets surpassing $34 trillion. At that level, China’s banking sector assets are three times the size of China’s economic output, at $11.2 trillion. Within this article, Eswar Prasad, former China head of the International Monetary Fund states, “The massive size of China’s banking system is less a cause for celebration than a sign of an economy overly dependent on bank-financed investment, beset by inefficient resource allocation, and subject to enormous credit risks.” We would add the mismatch of assets (long-term and illiquid) and liabilities (shorter term and with a high expectation of instant liquidity).

One needs to ask if the low rate environment driven by the US and Europe allowed China’s unstable asset build-up. As monetary accommodation is removed in the US and Europe, it will be interesting to see the impact on China.

We all have been living the last decade in an environment of downward pressure on interest rates. (Some may argue that it has been going on for well over 30+ years and the last decade is the icing on the cake!) As depicted in the chart below, the central bank’s around the world are taking their foot off the pedal with the US slightly tapping the brakes. 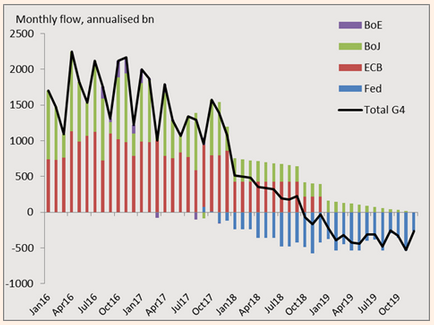 We have been discussing the disconnect we continue to see between actual economic readings and interest rates. 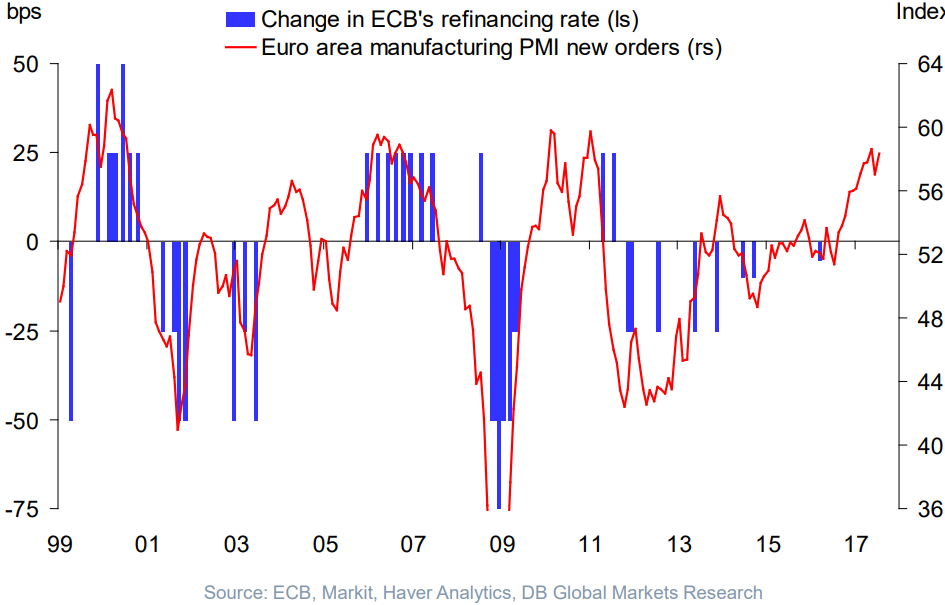 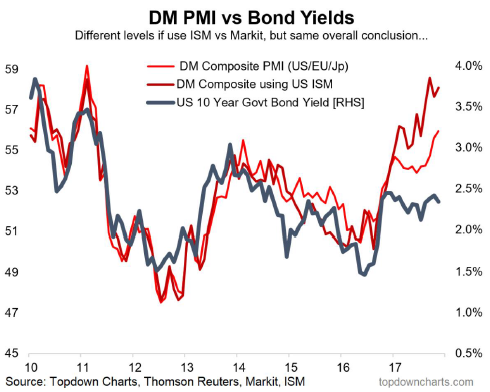 Ample evidence suggests as central banks move away from accommodative stances, interest rates around the world can see a material move up. Who can absorb those increases is in question. We continue to think the US and the corporations within it are more likely to sustain growth in a rising rate environment given the large cash levels and healthy profit levels. China and the weaker European companies are our prime concern.

Outside of death, the only certain thing is taxes. It is this claim on taxes that gives a currency value, funds common services, and allows municipalities of all sorts to take on debt at low rates.

Though the historical default rate of municipal debt is only 0.1%, the trend as shown above is not in the right direction. Jefferson County, AL in 2008, Detroit in 2013, Puerto Rico in 2017. Chicago is in trouble, and Connecticut also. There are ample examples of poor fiscal governance across all levels of government. Unlike the federal government where they can follow you (and collect from you) no matter where you live, states and municipalities lack that luxury.

To add salt to the wound, municipal pension funding is lackluster at best. Current unfunded obligations are $2 trillion. Not only are they underfunded, they have been progressively taking on more risk. As stated in this Bloomberg article, “Federal Reserve data show that in 1952, the average public pension had 96 percent of its portfolio invested in bonds and cash equivalents. Assets matched future liabilities. But a loosening of state laws in the 1980s opened the door to riskier investments. In 1992, fixed income and cash had fallen to an average of 47 percent of holdings. By 2016, these safe investments had declined to 27 percent.”

The global equity markets have experienced a nice year so far. We see reasons to maintain a fully-invested stance. However, there are a plethora of reasons to warrant cynicism and caution. We feel that our algorithms are designed appropriately given the concerns we raised. Time will tell.

Our current stance is to be fully invested yet defensively positioned. Our momentum signals, typically a strong signal for the bulk of a cycle, continue to be positive across most global markets and sectors. Our credit market signals are flirting with a cautionary zone though the credit markets continue to be liquid and stable. Valuation is high though not at extreme levels relative to history. Lastly, our interaction signals, measuring the propensity for a localized disturbance to become a global issue, are stable and constructive. The combination of these signals brings us to a fully invested stance yet defensively positioned.

This report is for informational purposes only and does not constitute a solicitation or an offer to buy or sell any securities mentioned herein. This material has been prepared or is distributed solely for informational purposes only and is not a solicitation or an offer to buy any security or instrument or to participate in any trading strategy. All of the recommendations and assumptions included in this presentation are based upon current market conditions as of the date of this presentation and are subject to change. Past performance is no guarantee of future results. All investments involve risk including the loss of principal.

All material presented is compiled from sources believed to be reliable, but accuracy cannot be guaranteed. The information contained in this report has been obtained from sources believed to be reliable, Auour Investments LLC makes no representation as to its accuracy or completeness, except with respect to the Disclosure Section of the report. Any opinions expressed herein reflect our judgment as of the date of the materials and are subject to change without notice. The securities discussed in this report may not be suitable for all investors and are not intended as recommendations of particular securities, financial instruments or strategies to particular clients. Investors must make their own investment decisions based on their financial situations and investment objectives.